In the same space are the hip-hopping
body-rocking
gucci wearing
disco dancing
money passioned young Sofiantsi
hungry for the smell, feel and taste of the falling sun
Posted by Todor at 10:13 AM 1 comment: 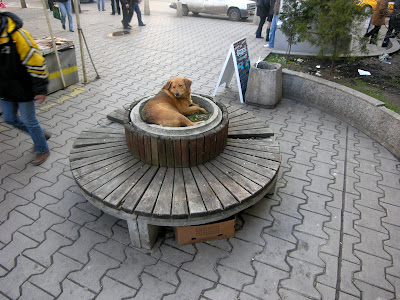 http://www.inyourpocket.com/bulgaria/sofia/sightseeing/socialistsofia/venue/27188-Soviet_Army_Monument.html
Posted by Todor at 7:39 AM No comments: 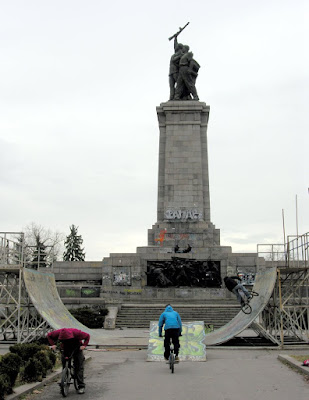 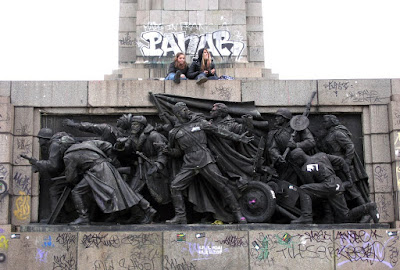 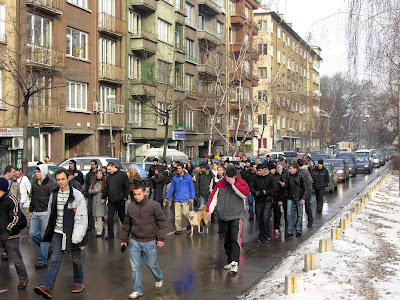 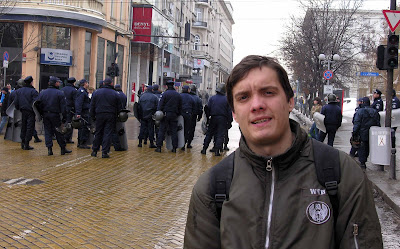 Dreaming of Sunny Barcelona during demonstrations

On my way from language class on January 14 I saw a group of young people walking in the street on Evlogi Georgiev blvd. They walked in front of the cars and some of them dragged a trash container into the street and dumped it. The drivers seemed fairly placid and amused by the demonstrators.
I met a young man in their midst who told me that he was demonstrating against the government. He spoke broken English and was surprised that I could understand him. He said he learned English from playing video games on the Internet. He was 22 years old, homeless for the past 6 years and living under a bridge behind the National Palace of Culture. He offered to show me where he stayed. We walked to the center of town where the demonstrations started that day. The police had an area cordoned off near Rakovski Street and all the demonstrators had left.
My companions dream was to go to Barcelona and work. He had a good friend there who was going to put him up. Sunny Barcelona was the place he would find work, companionship and happiness for sure.
Posted by Todor at 11:27 AM No comments: 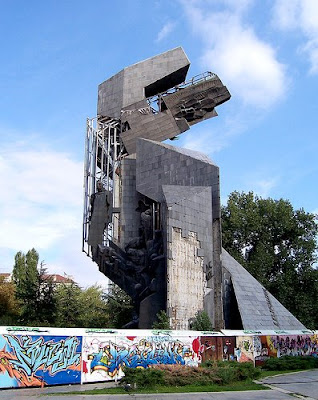 Hi all. My wife, four month old daughter and I got into Sofia to find out the Russian government has stopped all natural gas deliveries to Ukraine and Eastern Europe in the middle of a cold, snowy spell. This caused Bulgaria to loose all of it's heating fuel. Our apartment was being heated on about 1/2 capacity and the place was 60 degrees when we got there. A little scary with a 4 month old. Yesterdays deal the Russians worked out with the Ukrainians fell through so we are expecting more energy problems. The apartment is pretty warm at the moment because Bulgaria bought surplus oil for heating from one of it's oil refineries but anything can happen at anytime here. We are keeping our fingers and toes crossed because we don't want them to freeze off.
Met with my mentor yesterday. He is a great guy. He is going to help me get some contacts and have some exhibits when my projects are finished. He is taking me to the Soviet monument graveyard, so I am looking forward to seeing Marx, Engels, Lenin and other dignitaries in different forms of disarray. I might do a project there. He is also doing some traveling for these interactive CD ROM 360 panoramas he creates for the Bulgarian Ministry of tourism, so he wants me to come on some of those treks. He has made about 300 so far and they are really cool. You can virtually walk through some amazing historic sites and see beautiful architecture dating back to the Ancient Thracians - contemporaries of the Ancient Greeks. I want to be careful not to leave my wife and baby alone for too long, but he said the longest trip will be two days, so I will probably pick my spots and go on some of them.

Wednesday I'm going to his house to do a presentation of my work to the students in his Visual Semiotics class. The National Academy of Art where this class would normally take place is not heated and neither is his place, but I think it's easier for him to heat his apartment with a space heater, so the students voted on meeting there. I can go right after my language class, since it's just two bus stops away from his place.

Had a fun day in my first Bulgarian language class today with another Fulbrighter who just got here. She is here with her husband and daughter and is doing research in history on Nationalism in Bulgarian politics from the turn of the 20 century until the fall of communism I guess. She is great. The language class is harder than I thought it would be. I have an advantage over the Germans and New Zealanders we are taking the class with because I know Russian and the Cyrillic alphabet, but it's still not a peace of cake.

Went to the police station to register ourselves as tenants with our landlord Kamen today. Kamen means Stone. (They have some beautiful old Slavic names here like Ognian - fire, Tsvetan - Flower, Lyubomir - the Lover of Peace, Iskra - Spark and so on.) Registration is a leftover from Soviet days, when the government kept tabs on all citizens and foreigners.
After registering went to a great new tea house right across from our house. Kamen said it was a Turkish restaurant at one time. They have great teas and it's non-smoking, which disappointed Kamen, but made us very happy. It's the first place in Bulgaria that I have been to that does not allow smoking.

We are having a great time. Wish you were here.

Newer Posts Home
Subscribe to: Posts (Atom)
This is not an official United States of America Department of State website and the views and information presented are my own and do not represent the Fulbright Program or the Department of State.