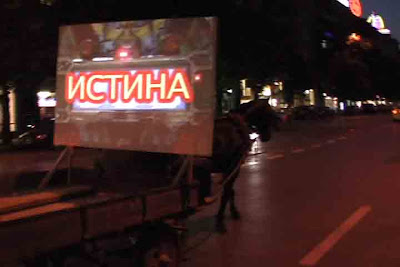 While living in Sofia I became interested in the Roma community of the city. They are most visible traveling the streets in their horse carts collecting scrap material from the trash or work sites. This marginalized community is living on the periphery of Sofia’s life in ghettos, economically impoverished and socially separated. In Sofia they are the only people still using horses, so there is a historic chasm between the Roma and the Bulgarians who drive cars. This mixture of contemporary and historic technology that can be observed in Bulgaria was my initial inspiration for creating The Gypsy Wagon Prophet Theater.
I wanted to give a voice to the Roma people by using their own traditional sayings. These sayings such as “What is a lie to you, is truth to me” contain clues to the history and identity of the Roma. See video. 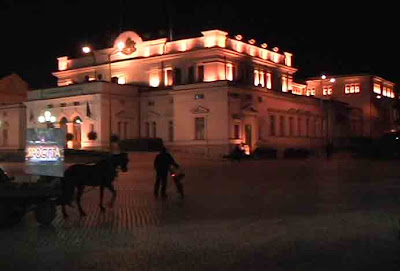 I used a video projection of a slot machine on a screen mounted on a horse wagon. The slot machine spat out Bulgarian Roma sayings as the wagon traveled through Sofia. The wagon traveled through zones forbidden to Roma wagons by the decree of the mayor such as the square in front of the parliament building and other center city locations. The sayings become scrambled with time as the words start to be randomly selected by the slot machine creating a sort of chance poetry. 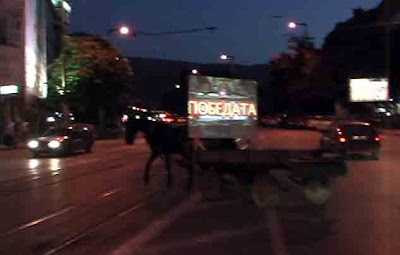 victory
To me the slot machine represents chance of birth, profiteering at the expense of the poor, fortune telling. The horse wagon represents a marginalized minority holding on to their historic way of life in a sea of contemporary society represented by the cars.
Posted by Todor at 5:20 AM 3 comments: